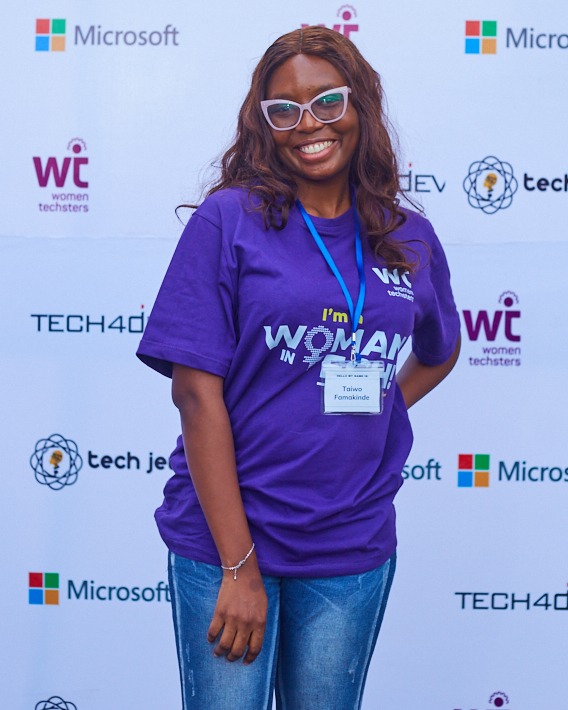 My name is Taiwo Famakinde, and I am a woman in tech. I come from a family of 7 from Osun State, Nigeria. I have a twin sister, and we’re the last children in the family. I studied Law at the University of Lagos and proceeded to the Nigerian Law School, Abuja, to further my education. After which, I started my career journey.

My career journey has been very adventurous as I have tried so many things but, I first took an interest in tech while I was in Law School. It was tough combining my new interest with a full-time course like Law. There was so much to learn as a beginner, and I had a tough time fitting learning practice into my schedule. As a result, I struggled with inconsistency.

When I finally graduated from Law School, I finally had time to face tech fully. Unfortunately, I had to start all over because, I realized that over time, I had forgotten so many things. However, I kept going because I wanted to break the bias that women could not be techies. I wanted to be known as a badass coder, and this was my motivation, alongside having a role model in my older sister, a software engineer who would not let me give up.

At this time, I got to know about the Women Techsters Program. A friend sent me the application on WhatsApp. She said I might be interested since I was always making posts and comments about wanting to get into tech. Before this time, I had tried several online training programs that ran for a few weeks, but all they did was scratch the surface. I needed more in-depth and detailed training, and so when I saw that the Women Techsters Program would be for a year, I jumped at it instantly.

I signed up for the Women Techsters Fellowship Program under the Software Development learning track. It was so intense but very insightful. I learned new concepts each day and worked on daily and weekly tasks that helped build my skill set. It was pretty challenging for me because even though I had graduated from Law school, I still had to prepare for my call to the Nigerian Bar.

I had cause to miss a lot of classes, and I wondered if I would ever catch up, but my facilitators were very supportive and provided all the help I needed. I also reached out to colleagues for support, and we just helped one another navigate the waters. This training phase made me realize that having a community was like having a superpower. I built for myself a non-traditional community made up of some of my friends who were developers. I was able to go to them for help from time to time, and they were accommodating and encouraging

The woman techsters training was worth it, and I’m super grateful for the opportunity. I found myself leading a diverse team of software developers from different countries to develop an application that would use machine learning to predict breast cancer and pitch the product to a panel of judges. Months before, I would never have imagined myself in that position.

I also recently participated in the Microsoft Hackathon with other young African women. At the Hackathon, we developed a practicable solution and built a product in 48 hours. It was a lot of work, but I gave it my all as a team member because I wanted to be able to join my teammates to say, ‘We built this product.’

I served as the front-end developer in my team, and it was indeed a marathon. I don’t think I have written codes for so many hours at a stretch like that before. Thankfully, we were assigned a mentor that was very helpful and encouraging. We built a product that was a virtual resource platform for women in rural regions who were pursuing a career in computer technology.

We pitched our product skilfully; the judges were super impressed and called our technology “hardcore.” My team finished 1st runner. I was so excited about this win and grateful to Women Techsters, as my training at Women Techsters heavily influenced this win. The technical and soft skills I applied in the competition, from building to pitching, were imbibed in me during the fellowship.

The skillset I built while I led the software developers on my team for our final project at the fellowship came in very handy throughout the hackathon. I am so confident that beyond the hackathon, I am well equipped to start climbing the ladder of my career journey. I would easily recommend the Women Techsters Program to anyone looking to start a career in Tech.

I want to encourage every lady out there to think of starting a career in tech. It won’t be easy, especially as tech is seemingly a male-dominated field, but it is possible. You’ll have to put in double the efforts of your male counterparts to stand out. Don’t be afraid to ask for help because you only miss 100% of the shots you don’t take.